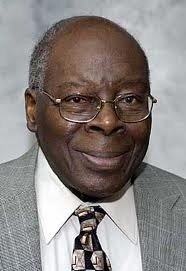 “My mother was a social worker during the Depression whose primary job was to help the poor and the destitute,” Dr. Hale recalls. “I helped her deliver clothing and food to poor families in Macon, Georgia, Bibb county and surrounding areas.”

His aunt, Mrs. Fambro, worked as a dietitian in nearby Fort Valley State College in Fort Valley, GA, for 44 years, her last 25 years at head dietitian. “She gave so many students with food and financial assistance,” Dr. Hale remembers. “Her actions, benevolence towards them and continuous loving support of me certainly helped to mold my personality.”

His childhood doctor, C.W. Dwyer, also made a significant and lasting impression. “Because I wanted to be like him, I wanted to go to medical school,” Dr. Hale says. “He was a family friend and a role model for me and for many others in Macon, Georgia.”

Born in Detroit on June 3, 1929, to George and Carlena Hale, he moved with his mother to her hometown of Macon four years later. Growing up in the Jim Crow South, “I obviously experienced segregation and racism,” Dr. Hale says matter-of-factly. “It was the temper of the times.”

He attended Bibb County Public School and Ballard High School in Macon before graduating from Talladega College in Alabama in 1950. “Many prominent African American families all over the nation sent their children to Talladega,” Dr. Hale boasts. “Talladega College was a progressive institution due to its student exchange program with Oberlein College in Ohio and increasing interactions with other black and white students, faculty and staff.”

But racism was hard to escape in the heart and the heat of the Deep South in the late 1940s. During a meeting of the Southern Christian Leadership Conference with white students from Birmingham Southern College at Talladega College, Dr. Hale vividly recalls members of the Klu Klux Klan marched through campus during his junior year. Sporting hoods and torches, “They trampled to our gymnasium, beat a large cross into the ground and set it afire and marched on.”

Fortunately most of the students were indoors attending a conference. Dr. Hale and another student extinguished the fire and removed the cross.

Following graduation, Dr. Hale returned to Macon and taught math and science for two years at Ballard Hudson High School. It was not his first choice – competition was extremely difficult to earn admittance into the two medical schools that accepted African Americans – McHarry and Howard Medical Colleges.

“I was able to get into McHarry Medical College in 1952,” Dr. Hale says. He was accepted as an extern at Jewish Hospital in Cincinnati during the summer of 1955. He received his medical degree from McHarry in 1956, “but finding an internship became a problem because of racism.”

Fortunately, Jewish Hospital offered that opportunity, accepting him as an intern (1956-57) during a time when few hospitals accepted African Americans as physicians. “Jewish Hospital accepted me when I could not get a residency anywhere else,” Dr. Hale says.

He served a fellowship in the Department of Metabolism and Endocrinology at the University of Cincinnati’s College of Medicine from 1959-60. The next two years, he served a stint with the U.S. Air Force at Dover Air Force Base Hospital in Dover, Delaware.

After leaving the service in 1962, he established a private practice in internal medicine at 437 Martin Luther King Drive – in the shadow of Jewish Hospital – an office that he still maintains today, more than 40 years later.

His hospital affiliations include Tri-Health Hospitals, Health Alliance Hospitals and Deaconess Hospital. He served as an assistant clinical professor of medicine in the Department of Internal Medicine at UC’s College of Medicine.

Dr. Hale is a founding member of Health Careers and Cancer Family Care, and has been active with the American Red Cross, the United Appeals Allocations Committee, the 648 Mental Health Board, the Child Guidance Home, the Health Foundation of the Academy of Medicine of Greater Cincinnati (also past president of the Academy of Medicine). He is a loyal member of the Allen Temple AME Church, where he serves as chairman of the Boar d of Trustees and as a Trustee of the Allen Foundation. He is a member of the Greater Cincinnati Foundation Health Initiative Committee, and he has enjoyed being a volunteer for 10 years (the Donald P. Sowell Committee and others for the Cincinnati Art Museum).

He and his wife, Sarah Hale, Ed.D, have received the Beacon of Light Humanitarian Award from Lighthouse Youth Services, the Urban League’s Glorifying the Lions Award and the National Philanthropy Day Award.

Much of Dr. Hale’s satisfaction comes from mentoring young African Americans studying medicine or those early in their careers as doctors. But there remains a tremendous challenge for African Americans for find equal footing in the medical field, in Cincinnati and nationwide.

“Most hospitals have inclusive residencies and African Americans on their staff, but most African Americans have been excluded to join the majority of physicians’ groups even though they are equally qualified,” Dr. Hale says. “African Americans are not participating in a meaningful way in these developments. In Cincinnati we have a few African Americans in major medical groups, hospital or private.”

For example: Speaking of prejudice he experienced early in his education and throughout his career, Dr. Hale says, “All those negative experiences were there and some still are, but I have vowed not to let them keep me toward my goal. I have been fortunate to have mentors who have supported me along the way.”

Dr. Hale is humbled by the Great Living Cincinnatian honor. “I’m deeply honored and I still can’t believe it,” he says. “It means a great deal to me and my family – my wife Sarah already mentioned, our son George Carl Jr., a graduate of The Whorton School of Finance, the University of Pennsylvania, and our daughter Valerie, a graduate of The University of Cincinnati College of Medicine.”

“We are highly pleased that I am thought of as someone who has contributed in a meaningful way to improving the quality of life for others in Cincinnati. Hopefully this will inspire younger people and others to give up time, talents and treasure to make positive differences in the community,” he adds.

“All of us have more than we realize to give,” Dr. Hale says. To whom much is given, much is expected.”

The Hales have lived in St. Bernard since 1962.

A snapshot from the old CMA site and the oral history that used to be on the CMA site are included below. (Click the scanned image link)

Pictures of CMA members discovered on Google images are included below.